On Sunday, Lori and I donated blood in support of wildlife at the Lindsay-Parsons Biodiversity Preserve in West Danby. Specifically, we gave generously to mosquitoes and deer flies at what was apparently Biting Insect Regional Headquarters. Aside from that, it was a nice walk along trails mostly through the woods giving respite from the hot sun.

The woods are particularly attractive hardwoods over hilly terrain shaped by the glaciers with the trickle of Cayuga Inlet meandering through it. The Preserve earns the “Biodiversity” part of its name with a profusion of trees, shrubs, ferns, and wildflowers, including a few we hadn’t come across before. We’ll be exploring this gem, only a few minutes drive from our home, many times as the seasons progress. In future summer visits, we’ll be bringing either transfusions or DEET to contend with the natives.

The weather has been so hot and humid since we moved to our Newfield home that we haven’t really experienced a clear dark night sky until just recently. There is much less light pollution here than in our previous locations in Vestal and Owego.

The image above was shot from our deck, looking south toward the constellation of Sagittarius. The bright Milky Way is interesting in that region because that’s where the center of our Galaxy resides. If we wanted to call a friend in that neighborhood, it would take 27,000 years before his phone would ring because that’s how long it would take a signal to reach that distance. We would have to wait another 27,000 years for his reply, “Hello?” The conversation would go slowly and I don’t think I would have the patience. Perhaps a postcard would be better. If the US Postal Service has a ZIP code for each of the stars in our Galaxy (and why not, it’s currently believed that there are at least as many planets as stars), we would need a ZIP+12 to cover the 400 billion stars just in our Galaxy, not even counting the other 170 billion galaxies in the observable universe. By the way, a phone call to the farthest observed galaxy would take 13.4 billion years before the phone would ring. That’s definitely beyond the limits of my patience. Besides, I’m doubtful Verizon covers that far.

Although not easily visible in this compressed Web version of the photo, the trees have little points of light all over them too. They’re fireflies, thousands of which put on an impressive show each evening.

We’re finding the perspective we get enjoying these evenings on our deck are effective antidotes to the daily dose of lunacy around us.

Lori has always worked a lot of extra hours at home to supplement the full work week at the office. With our move to Newfield, she will be working a couple days a week at home that she would otherwise invest at the office: same withering load of hours, different venue mix.

So, what kind of home office facilities does an IBM senior technical software engineer use at home? She’s still ironing out the wrinkles, but spare furniture is being pressed into service for the cause. An unpretentious spine-warping folding chair and an ad hoc adjustable-height desk does the trick nicely. Uncomfortable, perhaps, but board-and-bench style minimalist furniture seems appropriate for difficult and demanding work. Lori doesn’t think she would be any more productive at a mahogany and brass home-office suite; it is, no doubt, that kind of thinking that has kept her out of management. But she presses on relentlessly. 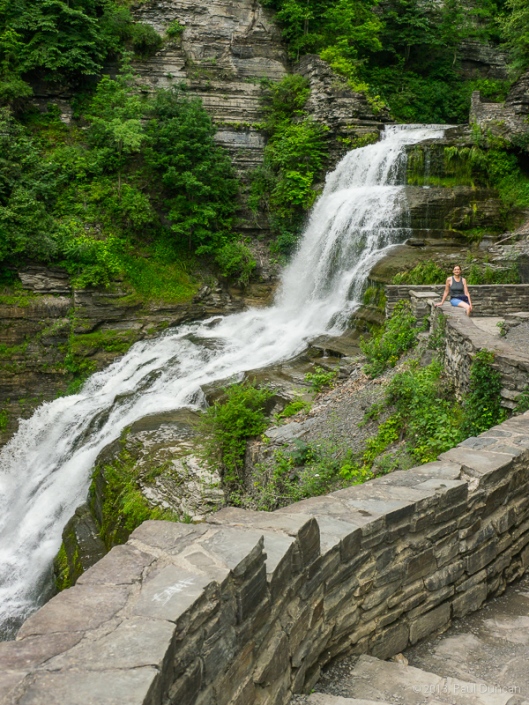 In a time-honored tradition, going back two years now, we celebrated Lori’s birthday by hiking in Robert H. Treman park. Once it was an hour’s drive from where we lived; now it’s 8 minutes from our new home.

With the unusually high temperatures and daily dumps of rainfall going back a couple weeks now, nature was operating the waterfalls at full capacity and had packed as much humidity into the hot still air as would fit. I imagined, in my fevered heat prostration, we had been transported to the jungles of Borneo. A machete would have been handy to hack through the viscous humidity. We were greeted by a cheerful older hiker with “Good morning, fellow fools!” In short, it was what Lori calls “comfortable”. I kept my views on the limits of human endurance to myself in order to permit Lori a pleasant hike on her birthday. Other than the risk of heat stroke and dehydration, the morning was pleasant. All the heat and rain had created a dense verdant lushness. We finished early as the crowds started pouring into the park.