Meeko enjoys a nice Fall morning on the deck (railing).

Meeko, our beloved cat of 21 years is no more, yielding to inexorable mortality.

Fundamentally she was an archetypal cat, effortlessly mastering essential cat skills. With an almost comical level of athleticism, she could climb almost anything. Two stories up the house, plucking at window screens to be let in at 3am was routine. She was a disturbingly successful and prolific hunter for many years, often attempting (and sometimes succeeding) to bring her trophies into the house. She was highly independent but always came home to keep tabs on us, supplement her mouse-and-bird diet with cat food, and seek out a warm lap for a nap. And use the litter box–she didn’t like to do her thing outside for some reason.

Other traits made her unique. She was terrified of young children, Kirby vacuum cleaners, and cameras pointed at her. She was very clever, learning how to open certain doors herself. She was also very smart. For example, she learned early on that we disapproved of tearing up the furniture upholstery. But the lesson she learned was she shouldn’t do it if we were awake. At night when we were in bed, major un-upholstering projects were undertaken–we lost several pieces to the landfill from her accumulated destruction. But we never caught her doing it in the act because that would be wrong.

She hated trips to the vet. Getting her into a cat carrier was a multi-day highly-stressful operation for us. We would quietly conspire some elaborate choreography to surprise, distract, seize, and cage her. She apparently understood our scheming whispers because she was always aware of the plot and made every attempt to foil it. We had to wear protective gear to avoid all the extra arms and legs with razor claws that she seemed to sprout. She learned to spell too–we couldn’t say “v–e–t” without her going on high alert. At the vet she was difficult to get out of the carrier and, once out, she made every effort to get back in. All was accompanied by loud howling until she was finally home and safe again. The vet said everybody knew when Meeko was visiting the clinic.

Meeko equally loathed being fitted with a flea collar or being dosed with flea medicine. This, too, required secretive plotting and special equipment to attempt it safely. The emergency room number was on speed dial. It sometimes took many tries over several days to accomplish the objective. Achieving the difficult task meant jubilation and great relief. Until next time.

In every case, all was forgiven and forgotten as we settled back into friendly relations, especially after we showered her with extra treats and attention by way of apology.

Meeko used to visit me while I was sitting at a desk. She would climb the back of the chair up into the gully between the chair back and my neck. She would sit there grooming herself and sometimes me on the back of my neck. It felt like being worked over with a small wet wood rasp. She eventually would squirm around a bit to settle into a nice comfortable position to take a snooze. I was reluctant to move at that point.

She also enjoyed joining me outside to take out garbage at 6:00am Tuesday mornings. She would join me on strolls into our woods or fields. She didn’t need me around to enjoy some quality time sitting on the lawn tractor in the garage.

Meeko had many toys over the years and she would play with most of them at least briefly, especially those that moved by themselves or were laced with catnip. But the one toy she stuck with her entire adult life (we don’t recall when she first got it) was a plain round ball covered in multi-colored fabric. She would bat it around and sometimes howl while carrying it in her mouth. We never understood the appeal but it was her constant diversion. We were always amused by the variety of places the ball would appear in the house, especially in the morning. A few times it was floating in her water bowl and had to be dried out before going back into service. Sometimes it would be left on one of our chairs as if she wanted us to know she was thinking of us.

Small cardboard boxes were another big hit. Package deliveries of the right size resulted in small boxes left on the floor for her. She would hop in, taking her little sports car for an imaginary spin–you could imagine her thinking “vroom, vroom!”

She became increasingly social in her later years. Her eyesight and hearing declined–the allure of outdoors ebbed and she insisted on spending more time with us in daily routines: slow petting descents together on the stairs in the morning, head-bumping and rubbing in early evening, and finally some quality petting, grooming, and snoozing every evening in front of the TV.

Eccentric behaviors emerged. She developed a habit of placing one front paw in her water dish while drinking (maybe to hold it down?). When she was done she would shake her paw splattering water all over the wall, floor, and herself. We were constantly toweling off the Meeko water park.

Right up to her last minutes she was devoted and affectionate. It’s brutal not having her around any more but she left us a supply of smiles to last the rest of our days.

Meeko was a highly-skilled climber. For example, it was efortless for her to get to the 2nd-floor roof.

Until later years Meeko was a reluctant photo subject, turning away or disappearing when a camera was pointed at her.

Ever-vigilant, Meeko would always keep an eye on things.

After climbing the back of the chair to my shoulder and then down to sit on my keyboard, Meeko subtly suggests we should be doing something else.

Meeko liked to spend time sitting next to, in front of, behind, or even on top of her gargoyle buddy. This was a common occurrence.

Sorry to say, this did not end well for the mouse. The cat, on the other hand, enjoyed the snack.

Meeko forgave us immediately upon our return from vacation by curling up on Lori’s lap. 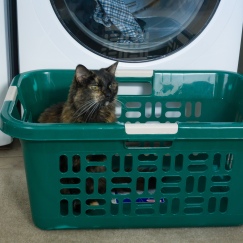 Laundry day means warm clothes are about to be placed in the basket. Meeko was ready. 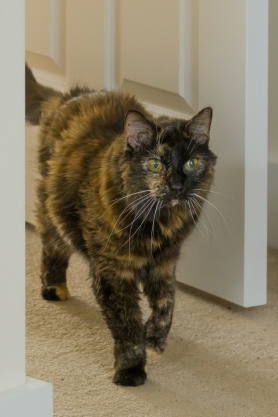 Meeko was quite clever and adept at opening doors herself.

My chair was a refuge after stressful events like visits to a vet. Here she stayed for several hours after hearing her mortality being discussed.

Her 21st birthday celebration was done in short segments with naps between.

Meeko’s ball, her favorite toy for many years, is now retired.

6 thoughts on “A Tribute to Meeko”