The numbers are in and February 2015 certifiably sucked, at least as far as weather was concerned.  Our area hit the lowest average temperature  (10.1° F) since data started being collected in the late 1800’s.  We had nearly twice as much snow as an average February.  We had 14 days where temperatures were below 0° F.  That’s it, we’re moving to Bellingham.  In a few years.  Maybe. 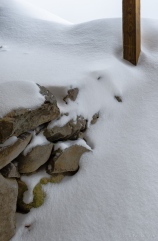