As we mark our first year living in our new home, we also have a year’s worth of data on how our geothermal heating and cooling system has performed. Subjectively, the answer is “great” with ample heat in the winter and air conditioning in the summer. We’re always comfortable and the air is not as dry as furnace-processed air.

A big test, though, is how it performs financially. Geothermal systems are more expensive to install than more common systems. The expectation is that the extra up-front cost is compensated by much lower operating cost. We were eager to find out.

Our system provides some basic historic performance data that are useful in estimating use costs. We can get monthly summaries of kilowatt hours (KWH) used by the system for heating, KWH used for cooling, and how many hours the system has been running.

The system does not report the power consumed by the motors driving the pumps for the ground loops. There are two 245-watt motors and, for the sake of guesstimation, we’ll assume they’re running when the heat pump is running, enabling us to estimate the pump KWH consumption.

Here’s what the data show for the past 12 months of heating and cooling in our Newfield home: 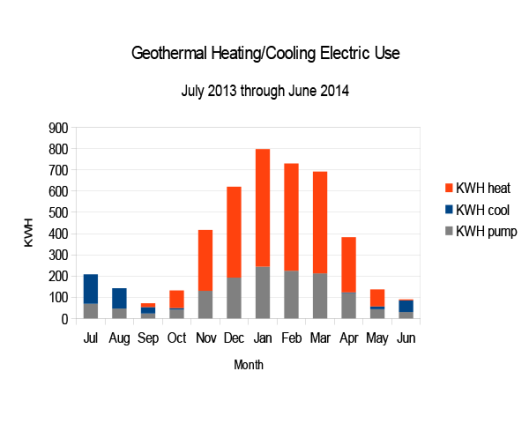 Cost For A Year

But It Was Cold Last Winter

We had a really cold winter in the northeast.  To estimate the costs of heating and cooling during more “normal” seasons, we can use heating and cooling degree day (HDD and CDD) data for our area to help estimate what the costs would have been in previous years. I looked up the relevant degree-day numbers for the 12-month period we used our system and the 2 previous 12-month periods before that.

Heating and cooling requirements for a building are proportional to the degree-day demands imposed on the system so, based on our year’s worth of data, we can estimate costs for the previous 2 years.

Each of the 2 previous years had warmer winters but also warmer summers so more AC would have been required. But still, those 2 previous years would have been less demanding and less expensive than our year because of the frigid winter we had. It looks like we’re going to spend somewhere in the vicinity of $500 to $600 per year for heating and cooling based on current delivered electricity rates here.

Our geothermal heat pump has a Coefficient of Performance (COP) of 4.0 to 4.6 for the ground loop system we have. Some back-of-the-envelope scribbling indicates that we would be paying 3 to 5 times what we are now for other conventional types of heating and cooling systems available in our area. We’ll be somewhat protected from the volatility in the propane and heating oil markets as well, although there have been some spikes in electric costs in some areas.