We have a particularly cold, snowy, and windy December and January.  The last couple days have been brutally cold with temperatures dipping down around -60° (estimated) with wind chill factors making it feel more like -120° (estimated).  Speech is difficult in these conditions as the vowels are nearly frozen out and even consonants become atonal ice cubes as they are formed in the mouth.  When you exhale, the water vapor instantly freezes and gently snows to the ground.

Likely a manifestation of Mother Nature’s sense of humor, this frigid weather descended on us as Kali and Michael visited from Austin (temperatures in the 60’s this time of year). Not to be deterred, Lori sledded them around various Ithaca-area highlights in an assault of determined tourism, even including a stop for Purity Ice Cream (to warm up).

Fortunately we’ll be getting some relief soon as temperatures warm up into the zero range.  But shortly after that, we’ll have a cold snap.

Everyone talks about the weather, but no one does anything about it.
–  Mark Twain 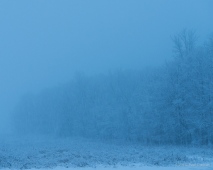