Meeko, a feline of intelligence and refinement, brought home a new friend from the jungle bordering our nascent lawn. We weren’t given proper introductions but let’s call the little field mouse “Mickey”. Meeko and Mickey enjoyed great times together, playing nearby. Sometimes Meeko would pretend to be distracted and Mickey would see if he could sneak away. Other times Meeko would toss her little buddy in the air. Mickey didn’t have the endurance that his big buddy had and took frequent rests, panting furiously to try to keep up.

Eventually Mickey seemed to collapse from overindulgence in the frivolity and Meeko tried to revive him, gently batting at him. Meeko eventually gave him a little nibble to try to provoke a revival. The revival did not come but drawn blood addled the refined sensibilities of the erstwhile friend, primordial instincts welling to the surface. One nibble led to a savage 15-minute long cannibalistic rending of blood, guts, and fur, culminating in the crunching delectation of the head. Mickey was no more.

Meeko retired a few feet away and groomed herself methodically after her savage meal. At length she paused, gazed to the field where she first met her little buddy, burped, and then resumed her grooming. 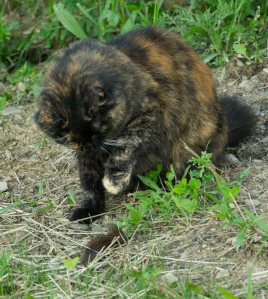 In retrospect, maybe Mickey wasn’t having so much fun playing with Meeko. What appeared to be playful taps from Meeko may have felt like being belted with an Ottoman with knives to Mickey. Perhaps the playful tossing in the air was more like being flung from a 4-story building by a thresher.

Ah well, life goes on. Except for Mickey.